This page is part of archived documentation for openHAB 3.1. Go to the current stable version

This binding integrates the Philips Hue Lighting system (opens new window). The integration happens through the Hue bridge, which acts as an IP gateway to the ZigBee devices. 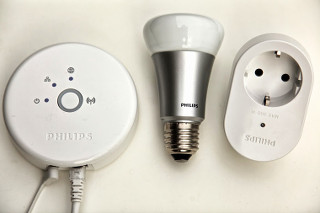 The Hue bridge is required as a "bridge" for accessing any other Hue device. It supports the ZigBee LightLink protocol as well as the upwards compatible ZigBee 3.0 protocol. There are two types of Hue bridges, generally referred to as v1 (the rounded version) and v2 (the squared version). Only noticeable difference between the two generation of bridges is the added support for Apple HomeKit in v2. Both bridges are fully supported by this binding.

Almost all available Hue devices are supported by this binding. This includes not only the "Friends of Hue", but also products like the LivingWhites adapter. Additionally, it is possible to use OSRAM Lightify devices as well as other ZigBee LightLink compatible products, including the IKEA TRÅDFRI lights (when updated). Beside bulbs and luminaires the Hue binding also supports some ZigBee sensors. Currently only Hue specific sensors are tested successfully (Hue Motion Sensor and Hue Dimmer Switch). Please note that the devices need to be registered with the Hue bridge before it is possible for this binding to use them.

All different models of Hue, OSRAM, or other bulbs nicely fit into one of these seven types. This type also determines the capability of a device and with that the possible ways of interacting with it. The following matrix lists the capabilities (channels) for each type:

Also, Hue bridge support CLIP Generic Status Sensor and CLIP Generic Flag Sensor. These sensors save state for rules and calculate what actions to do. CLIP Sensor set or get by JSON through IP.

Finally, the Hue binding also supports the groups of lights and rooms set up on the Hue bridge.

The Hue bridge is discovered through UPnP in the local network. Once it is added as a Thing, its authentication button (in the middle) needs to be pressed in order to authorize the binding to access it. Once the binding is authorized, it automatically reads all devices and groups that are set up on the Hue bridge and puts them into the Inbox.

The Hue bridge requires the IP address as a configuration value in order for the binding to know where to access it. In the thing file, this looks e.g. like

The devices are identified by the number that the Hue bridge assigns to them (also shown in the Hue App as an identifier). Thus, all it needs for manual configuration is this single value like

You can freely choose the thing identifier (such as motion-sensor), its name (such as "Motion Sensor") and the location (such as "Entrance").

The following device types also have an optional configuration value to specify the fade time in milliseconds for the transition to a new state:

The groups are identified by the number that the Hue bridge assigns to them. Thus, all it needs for manual configuration is this single value like

The group type also have an optional configuration value to specify the fade time in milliseconds for the transition to a new state.

The devices support some of the following channels:

To load a hue scene inside a rule for example, the ID of the scene will be required. You can list all the scene IDs with the following console commands: hue <bridgeUID> scenes and hue <groupThingUID> scenes.

The dimmer_switch_event can trigger one of the following events:

The tap_switch_event can trigger one of the following events:

This binding includes a rule action, which allows to change a light channel with a specific fading time from within rules. There is a separate instance for each light, which can be retrieved e.g. through

where the first parameter always has to be hue and the second is the full Thing UID of the light that should be used. Once this action instance is retrieved, you can invoke the fadingLightCommand(String channel, Command command, DecimalType fadeTime) method on it:

In this example bulb1 is a standard Philips Hue bulb (LCT001) which supports color and color_temperature. Therefore it is a thing of type 0210. bulb2 is an OSRAM tunable white bulb (PAR16 50 TW) supporting color_temperature and so the type is 0220. And there is one Hue Motion Sensor (represented by three devices) and a Hue Dimmer Switch dimmer-switch with a Rule to trigger an action when a key has been pressed.

Note: The bridge ID is in this example 1 but can be different in each system. Also, if you are doing all your configuration through files, you may add the full bridge id to the channel definitions (e.g. channel="hue:0210:00178810d0dc:bulb1:color) instead of the short version (e.g. channel="hue:0210:1:bulb1:color) to prevent frequent discovery messages in the log file.

The optional <EVENT> represents one of the button events that are generated by the Hue Dimmer Switch. If ommited the rule gets triggered by any key action and you can determine the event that triggered it with the receivedEvent method. Be aware that the events have a '.0' attached to them, like 2001.0 or 34.0. So, testing for specific events looks like this:

The Hue Bridge can sometimes be late in sending its UPnP 'ssdp:alive' notifications even though it has not really gone offline. This means that the Hue Bridge could be repeatedly removed from, and (re)added to, the InBox. Which would lead to confusion in the UI, and repeated logger messages. To prevent this, the binding tells the OpenHAB core to wait for a further period of time ('grace period') before actually removing the Bridge from the Inbox. The 'grace period' has a default value of 50 seconds, but it can be fine tuned in the main UI via Settings | Bindings | Hue | Configure.

Caught a mistake or want to contribute to the documentation? Edit this page on GitHub (opens new window)